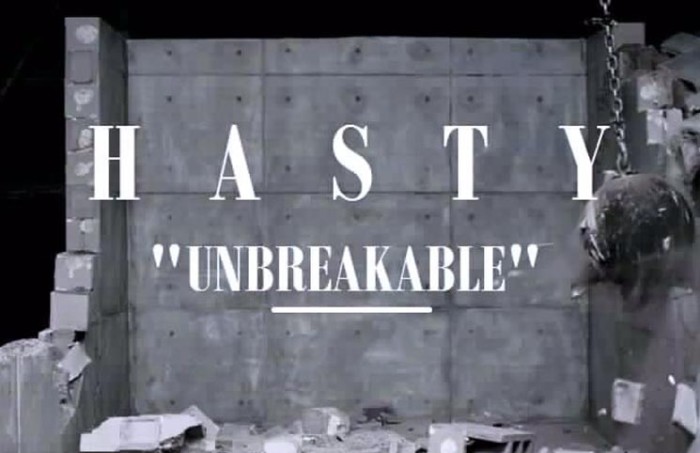 Unbreakable is the ninth studio album by Eastern Cape rapper Hasty. The album was released for free as through away digital album to music lovers, fans and music critics under Block Boi. The album features guest appearances from Luthoz and Jazmine (his daughter).

Early 2014, Hasty in a short chat with Smash, editor of BEATMagazineSA he mentioned working on a project but at that this it was not clear. Then he released a mixtape titled ELOHIM as an appetiser to Unbreakable.

Unbreakable received mixed reviews from the music rating scheme giving it 3 stars out of 5.  Generally, it opened with positive reviews with the title track opening the project so deeply and harness. The album’s state is not as steep as WMMGG, because on this project Hasty sounds so relaxed and tired than the energy that he brought on 6 Prayer and WMMGG was amazing. Yes, Unbreakable is a good album but the influence and energy from the sound is to slow to capture focus and attention.

Lyrically, it does not make a better score than 3 stars out of 5. They are loop holes in it, for instance to get more people to listen a project it needs to have good lyrical content that will attract sales for future projects. Secondly, the explicit content that scores the sticker is not a good sign of introducing music to a layback market like Eastern Cape where the power of a buyer depends on parent’s hands. No parent or corporate organisations that will have interest to invest time in cursive material. On the second song with Luthoz “She Dead” he sounds so distant from the heat of the song. This project sounds so rushed as compared to the previous album because of the clear direction that WMMGG possessed to ears. Unbreakable is not Hasty’s best project, as he can do more than what he did and bring back level energy and direction that will attract more people to listen to his music and invest in it. Hasty is one of the few rappers that are lyrically strong but in order to put that into advantage, less explicit material will open doors.

“The future is bright for this rapper, but he is the chase with time”. – Smash.