Home EVENTS The 3rd Annual Ebubeleni Festival is back 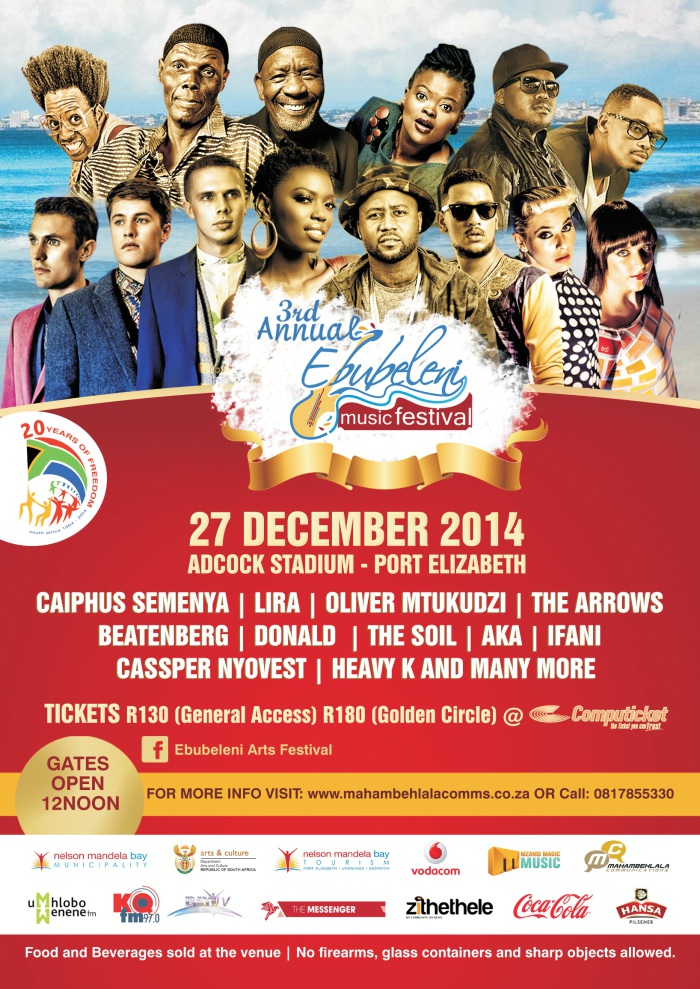 The third Annual Ebubeleni Music Festival is back with yet another mouth watering line up. With this year’s theme “Celebrating 20 Years of Freedom and Democracy through Music”, the event promises to give the Bay revellers the best they  have ever seen.

Taking place on the 27th of December 2014 at Adcock Stadium in Port Elizabeth, Nelson Mandela Bay, Ebubeleni Music Festival is ideally positioned during festive season on the last Saturday of December.  The event is meant as homecoming for the people of the Bay, also as a yearly get-together affair for those who work and or study in different parts of the country.  Those that are not from Nelson Mandela Bay are encouraged to embrace the event as part of the reason to holiday and spend part of their Xmas Holidays  in the friendly city.

The festival forms part of Nelson Mandela Bay Municipality’s Annual Summer Season Programme which starts from the 16th of December until the 31st of December.  Other sponsors include the National Department of Arts and Culture’s “Mzansi Golden Economy”.  The department’s vision  goes beyond social cohesion, they believe that arts, culture and heritage play a pivotal role in the economic self determination and skills development of people.

Ebubeleni Music Festival is an outdoor music festival with a picnic feel and strives to provide entertainment, with this in mind the organisers have provided for the kiddies corner where parents can take their kids for Face Painting, Baloon Twisting, Jumping Castle, TV Games and color-in activities in a closed off area within the stadium.

Economic Benefit for the Bay –all service providers of this event are sourced from the Nelson Mandela Bay Municipality from accommodation (hotels and guest houses) ; technical – stage and sound; caterers; infrastructure (marquees and toilets) and furthermore the organisers of the event would like to invite vendors/stalls for those who wish to sell their wares, be it Food ; Ice Cream; Glow In The Dark; Same Time Pictures; Arts and Crafts etc.  The Bay’s Local artists will also showcase their talents whilst sharing the stage with the country’s well-known national artists and icons.

“With an affordable ticket price of R130 for General Access and R180 for Golden Circle for a line up as attractive as this, we are inviting everyone from the Bay, neighbouring towns and afar to come and end this year’s celebrations of the country’s 20 years of freedom and democracy in style at the Ebubeleni Music Festival” said the event’s Project Manager, Marc Mahambehlala.

The event starts from 12 noon until late, people are advised to come early to secure their picnic spots.  Food and beverages will be sold at the venue but people may bring their camp chairs and picnic baskets.  Bottles and weapons will not be allowed into the venue.

Computicket/Shoprite Checkers is now open for tickets sale and no tickets will be sold at the venue.

People who would like to sell their wares at the festival must contact Greg Moses on 082 659 2803 to book their stalls.